Apple has become a great platform for all the gaming enthusiasts who can build up freaking gaming applications. App store has become a crazy good store with stunning games.

It is supposed to be the best acted video game. The dead zombies and their rise will offer an enthralling experience. The zombie adventures are back on the mobile device and it is a great way to replenish your time and thoughts. This game will attract you like anything and will make you forget about the device. It lets you to emotionally attach with the characters and play the game. 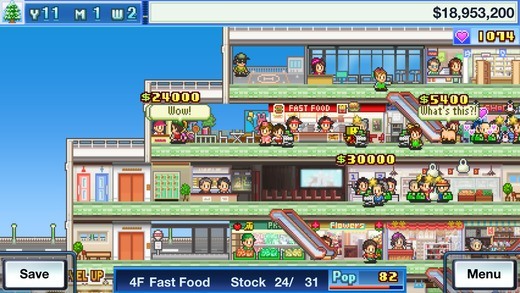 How would you like to build a tall mall that is built with fantasy themes and background pictures? The gamers will have to start by building a two storey mall with minimal usage of resources and then slowly grow the building to a massive architectural piece. And what more will you ask when you have to include helipad, subway, tunnel, metro train station, bus depots nearby etc.

It is one of the first gaming applications that involve good music. Most of the games will have the thrashing and loud noise when you play. This will take you to a different and new world where you will be filled with full of love. The groove actually follows the musical track and will pick up the quality on its own depending upon the musical track being played. There are close to 15 stages and it will be an amazing experience to play this game.

It is one of the oldest games but it still tops the chart when it comes to most downloaded games on iOS devices. It lets you to feel the beauty of space and explore things in it. The musical blend with the gaming features is a value add for the gamers. The rising number of challenges as you grow the ladder will help you to learn a bit of physics too.

It is one of the best tower defense games available. The game is set on a comedy fantasy theme. The colorful graphics, clever boss battles, pop cultures and secrets and there is a lot more fun added to this game.

I bet that you would have never seen a game like this before. I do not know why Apple alone draws the inspiration to build such games. The creators have put in a lot of thought in developing the theme. The game is awe inspiring and deceptively simple. The ultimate objective is simple. You have to device channels to direct the flow of water. With every stage crossing, there are interesting obstacles and you have to apply your brain to clear them.