OnePlus had recently confirmed to the verge, the successor of OnePlus 3 and 3T will arrive this summer. Little is known about the specs it will sport but the naming is revealed. It will be called as OnePlus 5 because 4 is considered to be an unlucky number in China, where it is based. Rumors suggest that it will sport dual camera at the rear and have mostly high-end specs.

Ironically, this will be the fifth phone produced by OnePlus. When asked about what’s the inspiration behind it’ the smartphone’s gaming, OnePlus revealed that their employees are huge fans of former NBA star player, Robert Horry, who rocks a number five jersey. They even have his paintings hanging in their office.

OnePlus ventured into smartphones three years ago when they made the news with their first Phone. There’s been no looking back since then. They have seen a great amount of success. Last year’s models OnePlus 3 and OnePlus 3T were huge successes. OnePlus has now found a niche for themselves in the smartphone industry by leading a market with high-end Phones priced well below other smartphone makers like Apple and Samsung. 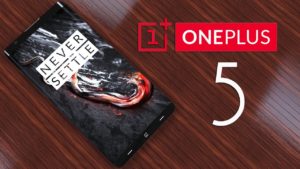 OnePlus 3 and 3T were some of the best phones released last year. Based on the obtained rumors, OnePlus 5 will sport 6 GB of RAM and 128 GB of storage. Although 8 gigs of RAM and 256 gigs of internal storage is also speculated. It will have Dual cameras of 12 MP and a front shooter of 8 MP according to the latest rumors.