In the world which is full of similar tablets there exists a very tough competition to survive in the market   and stay in the race of modernization, Japanese   electronics giant Sony is coming with all new Sony tablet P which is very much different from all other tablet which are present in its competition it is loaded with Google operating system android Honey comb 3.2. It is the world’s first clamshell design tablet, compact in size but full of features. 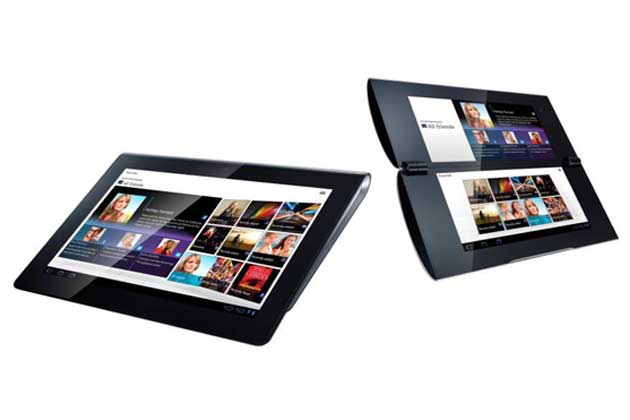 The answer is very simple since Sony is one of the company which doesn’t work only to make profit or increase their sale. They give equal preference to customer satisfaction which makes Sony the best among all other electronics company. when we talk about tablet P undoubtedly  it is best in both looking and processing .Sony has introduce clamshell design which make it different from I-pad and all other tablet. In terms of plain aesthetics, the tablet P has got every bit of delicacy and class which you’d want in your device. Smooth curves, metallic finish, few plastic and brilliant colour tones make it very attractive and impressive. In its first view you will become mad for it.

The tablet P is powered by a dual-core 1GHz Nvidia Tegra 2 processor and has 1GB of RAM with android Honeycomb 3.2 onboard and you can upgrade it. it is super slick and very fast ,it get started very fast and you won’t fine device lagging ,even when also the tablet is loaded with bunch of heavy application it is better than Amazon kindle fire. It comes with 5.5 “dual TFT capacitive touch with resolution 1024×480 which makes it suitable for various video formats.  Its touch allows you to control everything with your finger tip.


Sony Tablet P Price in India is available at an unbelievable price at Rs.36,890/

Tablet P is comes with dual screen functionality which help us to control various function at one go. Sony is well known for its music and its quality also launched xperia J, xpeia T and xepria V last week. In tablet p it again comes with the same quality of music it can easily make anyone freak of music   for music all controls are shifted to the upper screen, along with the album art, and the bottom consist of a collage of all your album allowing you to segregate all your favorite music. It comes with 5 band equalizers with support for custom presents, along with a dynamic normalize and xLOUD technology. Loud speaker is not of up to date level but sufficient for personal use, but sound in earphone is awesome.

Gaming one of the major feature for which people go for Sony, as predicted this tablet provides you gaming experience which you never had before. The nvidia processor support maximum games which high quality displays you can enjoy each point of the game.

The tablet P comes with quad-band 3G (and 4G in some models), Wi-Fi with DLNA. Bluetooth 2.1 and GPS. It gives you very good speed when connected to the network while browsing the tablet should be open completely for the best view otherwise the full view of website is not available.

P comes with 5 Mega Pixel rear camera and VGA front camera. It’s capable of recording videos at 720p at the frame of 30fps which is very good for a tablet.

Sony tablet p is a multipurpose gadget which comes with all the feature ,beautiful looks adorable display impressive connectivity, incomparable touching experience , delightful music and enthusiastic gaming experience, its battery life is very good we can use it for a long time without charging so it is best for travel and educational purpose where charging point are not easily available . So this tablet is a good option for which you can go for.