Samsung Galaxy S3 being successor of Galaxy S2 is coming with a better and powerful processor.That Is quad core 1.4GHz Exynos processor.

Samsung Galaxy S2 comes with a dual core processor with speed of 1.2GHz. 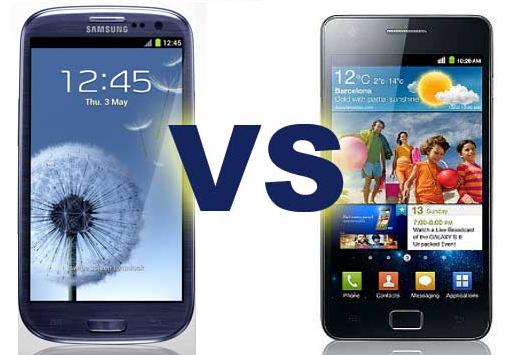 Galaxy S2 was launched with Gingerbread and recently got firmware update to Ice Cream Sandwich Android 4.0.3 although it is still coming with older Touch Wiz UI version. For some of the carriers the firmware update is still pending.

Galaxy S3 being the latest handset in galaxy series is coming with latest version of Ice Cream Sandwich Android 4.0.4 and Touch Wiz UI.

Galaxy S2 and Galaxy S3 both has 8MP camera with Auto Focus, LED Flash and a resolution of 3264 x 2448 pixels. Other than this the handset has 2MP of secondary camera.

Samsung Galaxy S3 comes with 8MP primary camera with almost same features as in Galaxy S2. The secondary camera is of 1.9MP along with HDR capability.

Battery is of most importance and is one of the most talked features.Having More Features is not sufficient if the Gadget does not have Battery Pack up.So Lets See The Battery Comparison.

The Galaxy S2 may have packed a 1650 mAh battery, which provides talk time of about 18.30 hours and standby time of about 710 hours, but the Galaxy S3 is said to be equipped with something with more punch, an “all day battery.”

The Galaxy S3 is not only more powerful, it’s also got a larger screen and more battery life. It goes without saying that it outshines its predecessor

Galaxy S3 is an impressive piece of hardware, the Galaxy S2 doesn’t really fall behind too much. Customers will definitely be satisfied if they buy Samsung’s Galaxy S3.

Samsung Galaxy S3 undoubtedly has better specifications and Ex ordinary  features in comparison to Galaxy S2I. Samsung galaxy S3  is latest in Galaxy series and that’s why it is currently coming with a higher price and if you have tight budget then Galaxy S2I is a better option. So which one would you go for???. And Don’t Worry About Cost Of The Gadget Feel The Features And Life Of The Gadget.