Recently an event called Digi Dhan Mela held in Talkora Stadium in New Delhi, where you PM Narendra Modi has launched a new app called BHIM by which people can easily do UPI transactions. Finally, I can expect that the dream of every Indian is going to come true, i.e., digital India. To promote Digital India initiative, the government has finally launched an app called BHIM (Bharat Interface For Money) in google play store. Actually, the app was formerly known as UPI app which is now rebranded as BHIM. The app’s size is just 2 MB, but it is very much useful and helps people to make payments smoothly.

The app is specially launched to take on virtual wallets like Paytm, Freecharge, Mobikwik, etc.; these apps have become so popular since the time when Narendra Modi has announced the ban of Rs 500 and Rs 1000 currency notes. PM Modi also made a payment to Khaadi while launching the app.

Now you no longer need to hold cards from different companies like MasterCard, rupay, visa, etc. to make payments or purchases. Now you can easily make purchases or payments through UPI (Unified Payment Interface). The app is expected to minimize the use of plastic cards, and to maximize the digital payments. BHIM is the biggest step ever taken towards cashless society so far. 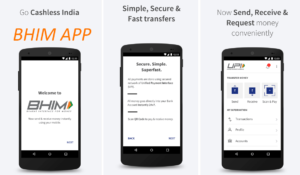 How To Setup UPI?

Note: Currently only a few banks have enabled the UPI option, below we’ve mentioned the banks which have the UPI facility.

Soon other banks will also start providing this facility, till then keep an eye on our website to know more updates and information. If you have any questions/doubts then do comment them below.