The HTC U11, the smartphone maker’s upcoming flagship for this year has been in the news lately. Scheduled to release this May, the U11 has met with average reviews before it’s even released. This is due to two things regarding hardware. One is the removal of the 3.5 mm headphone jack, following Apple and Motorola. The 3.5 mm jack is becoming extinct now a days. Fans of HTC voiced their disappointment through the forums all over the internet. Most of them say that they will stick to their older phones this year as the new flagship is not appealing in terms of design. 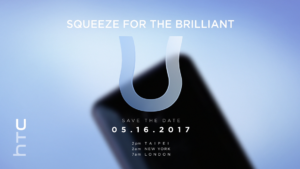 The other concern is the huge top and bottom bezel that HTC showed off with this mobile device. People are disappointed as they expected something new in terms of aesthetics like the new Samsung flagship, the galaxy S8. According to HTC, the removal of the headphone jack is only for improving the audio quality. They believe their USB C port would give their consumers a better experience.

The upcoming flagship comes with the new HTC Sense technology which would allow the users to access the features by using the sides of the phone. It might be a rip off of Samsung’s edge features that came with last year’s Samsung galaxy edge. The HTC U11 is rumored to come with 6 GB RAM, 256 gigs of storage, a 12 MP dual pixel rear camera, an 8MP front shooter and a 5.5 inch QHD display. Also, a 3700 mAh power battery with quick charge technology is being speculated for this flagship device.