Microsoft announced a brand new feature called “Clipboard” at Build last week. It will be available with the Fall Creators Update for Windows 10 which will roll out in September and if you are a windows insider, right now. But this update is yet to come to Windows Insiders. Clipboard is essentially a Microsoft garage app “OneClip” which disappeared somehow. Microsoft Garage team makes some amazing stuff and you should definitely check them out if you are curious. Their apps are not bound to only Windows platform, they are available to iOS and Android users too. 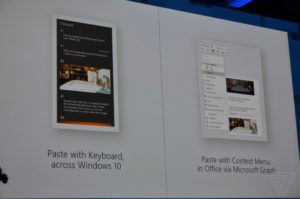 Microsoft’s Clipboard will be built in directly into the OS and needs to be hooked to a Microsoft account. It will allow you to share content copied on one machine with your other windows devices and even android and apple devices. All it depends on is your Microsoft account.

Microsoft says “Clipboard is a fast and easy way to copy and paste just about anything between connected devices, whether you’re on a Windows PC or your favorite mobile phone. Just hit copy on what you want to grab; your photo, map link, paragraph, even an animated GIF; and it is ready to paste into whatever you want”

Microsoft explained it pretty clearly and they are agnostic of platforms unlike Google and Apple which is a great thing. They announced at Build that they want to make Android and iOS great and not just Windows. That makes way for a new Microsoft that wants to make the world a much better place technologically and it doesn’t matter which device you’re using. Great. Isn’t it?