It is widely rumoured that Samsung will unveil its flagship smartphones, the Galaxy S8 and S8 Plus by the end of March, probably March 29. Now, a poster leaked online saying ‘2017.4’, which hints that the phone will be launched in April 2017 for sure. A big ‘S’ is present with the top and bottom bezels. 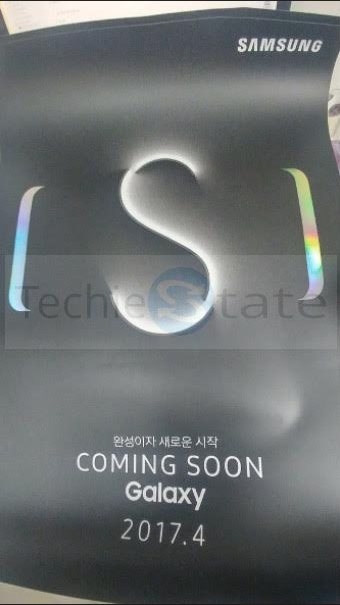 As per earlier leaks, the Samsung Galaxy S8 will have a 5.8-inch QuadHD display with dual curved edges. Camera-wise, the phone will include 12MP Dual Pixel primary camera, 8MP front shooter. A powerful Snapdragon 835 SoC paired with 4GB of RAM is hinted. There will be a 64GB of internal memory. It will also feature an iris scanner. Fingerprint sensor is placed on the back of the phone this time.

A couple of differences between the two include screen size and battery capacity. Samsung Galaxy S8 Pus will have a 6.2-inch QHD+ Super AMOLED display. Battery-wise, the bigger variant will have a 3500 mAh battery.

Previous Post Broadband Speed Tests and What They Mean For You