Samsung ARRAY is one of the three handsets models which were launched by the ‘Boost Mobile’ at the New York City on August 22. Samsung Array has been launched as a basic phone for the basic users. This basic phone with CDMA connectivity features a slide out QWERTY keypad, which in a nutshell has a 3.5mm audio jack, 2-megapixel camera, have a memory card slot and voice dialling. 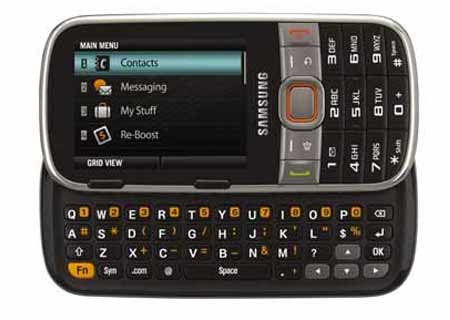 Samsung Array weighs 117g and has a dimension of 112 x 54 x 15 mm. It is a basic phone having a 1000maH battery which may give you a talk time of around 240 minutes or 250 hours in its standby mode. The screen used is a LCD one having a resolution of 240*320 pixels (QVGA) and is having a size of around 2.4” diagonally. The phone is having a proprietary platform or OS which gives a better response to fulfil the general needs. Samsung Array is using Qualcomm QSC6155 processor which is having a processor speed of about 480 MHz.

In further features, the phone is having all the other basic amenities for its user. The phonebook can have 600 entries and multiple number can be saved per name in the phone.the phone has been provided with Netfront 3.5.1browser for the access to the Internet. Side keys for volume and camera are also present there. The camera as already said has been kept to 2 megapixels having features like panorama shoot and night mode. It is having a resolution of 1200 x 1600 pixels. One can download Java (J2ME) applications to the phone.

The price of Samsung Array has been kept to an amount of $60 and the phone is expected to hit the market in the first week of September. According to me, the idea of having the phone launched with the other 2 smartphones (Samsung Rush and Samsung S2 4G) could have been that it has been trend for a while to keep a basic phone along with which can meet your normal needs as well. If you are among the group of the people who are yet far away from the trap of Android and Windows and are still not fantasised with all that these OS give, can have Samsung Array for sure.

Next Post Google Chrome Extensions-Features with some Recommended Ones