Codenamed Project Cheshire, Microsoft was working on a to-do app since it acquired Wunderlist, the popular list making app back in 2015. The official app is out on the web and through stores on Windows 10 PC and Mobile, Android and iOS. It is still in preview stage with more features due to come out.

The app itself looks pristine and simple with a nice welcome screen that asks you to sign in through your Microsoft account. The words ‘It’s time to plan your day. Add a to-do’ are placed exactly in the center of the page with ‘Add a To-Do’ placed at the bottom left of the screen. Anyone who has used Wunderlist can feel the same vibe in terms of design. 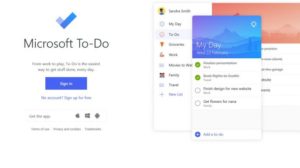 These are the features of the app currently, with more coming in the near future

The app lacks sub-tasks and outlook and office syncing which should have been added as they are pretty basic features in any to-do app. Also, you can import your lists from other apps such as Wunderlist and Todoist. There’s a nice completion sound too that plays once you complete the task. This is a must app for all the procrastinators out there. Give it a shot and let us know your thoughts in the comment section below.