We all know who Chuck Norris is. We have seen his legendary movies and the way he beats up bad guys is a feast to watch. He is the Rajnikanth of the western world. A game on him was inevitable. All his fans can now enjoy playing his character on their screens. 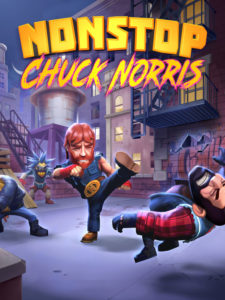 Nonstop Chuck Norris, a newly released action game based on the famous actor is now live for android and iOS users around the globe. It is available for free in both Google’s and Apple’s app stores. The game lets you be the unstoppable Chuck Norris. In this non-stop adventure game, Chuck Norris travels through multiple universes, fighting the bad guys while collecting jokes and facts about his legendary status.

The game also lets you collect tons of weapons such as foldable chairs, chainsaws, selfie sticks and much more. You can use these weapons and enhance your gaming experience. Chuck Norris’s signature style kicks and fist slams are also imbibed in this game.

The developers behind this game are “flare games”, a mobile gaming publishing company based in Germany. The CEO of flare games, Klaas Kersting stated “It is a video game maker’s dream come true to be able to make a game starring Chuck Norris. We want this game to be picked up by anyone and played. We have approached this by making the game playable offline. This makes the people without Internet access to play this game without worries”.

Go ahead and give this a game a shot.