Yesterday, it was reported that HTC is planning to launch Android Nougat 7.1 flagship smartphone in coming months. The phone is rumoured to be launched as HTC U (codenamed HTC Ocean). Now, another HTC phone with same HTC U specs appeared on AnTuTu benchmarking site today. As per the listing, the phone is dubbed as HTC CBP, revealing Android 7.1.1 Nougat, Snapdragon 835 chipset paired with 4GB of RAM. Internal storage space is 64GB. 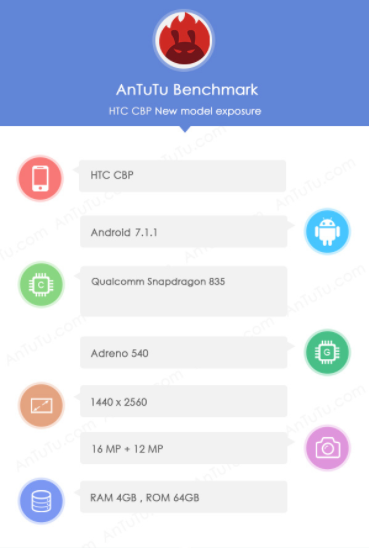 Camera-wise, the phone features a 16-megapixel front camera along with a 12-megapixel rear camera, reveals AnTuTu listing. The phone will carry a Quad HD display with resolution of 2560×1440 pixels.

Yesterday, HTC U was in News for its speculation and expected features. HTC U would be the third U series smartphone from the company. HTC has already launched two U series smartphones – HTC U Ultra and HTC U Play. It is said that the HTC U will be skinned with the latest version of HTC user interface, Sense 9. It is highly expected that the phone will be equipped with a 12-megapixel rear camera and a 16-megapixel selfie camera. Same specs are shown in the AnTuTu listing as well.

Next Post 5 Specs to Look for in a New Laptop