Amazon, the leader worldwide in e-commerce industry is working on technologies that significantly lower the dependence on human labor. We already know that they are working on drone technology to replace humans delivering products to it’s customers. The CEO of Amazon, Jeff Bezos has recently hinted at the company’s plan to make the delivery and logistics chain as efficient as possible with better use of technology.
In 2012, Amazon invested in the robotics company Kiva that helps to ferry things or items around its warehouses. This lead to a drastic reduction in shipping time, from 75 minutes to 15 minutes. This has also lead to more opportunities for Amazon to redesign their warehouses to be used effectively by Robots. This has also lead to space optimization in it’s warehouses. They can now accommodate more boxes per square foot. 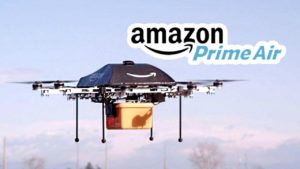 The billion dollar company is also running contests to build a robot that can identify, sort and pack the items from what it sees. This is really intriguing. Amazon is vouching for robotic based start ups like Right hand robotics in achieving such goals. It’s safe to say that the company is all for robotics. Also, one of the major technologies Amazon is basing it’s future on, is Drones. Back in 2013, they announced that drones will be delivering their products in the future.
That future might not be far away, as the multi national product based company is prepping itself to launch drones by various tests. The drone technology will remove the middleman(in this case, the delivery guys) from work and let them focus on improving customer experience by faster delivery and shipping schedules.