Fancy buying a new television? If so, there’s a lot to take into consideration. To help ease the process, here are a few of 2015’s hottest selling flat-screen televisions and the brands you want to avoid.

The following televisions are guaranteed high-quality, and each will air programming in stunning high-definition.

Samsung’s H7150 is one of this year’s best-selling televisions due to its 55-inch screen and ability to “enhance color, contrast and detail.” The clear coat screen, and similar contrast levels, makes this TV similar to the ever-popular H8000, but the H7150 has a curved screen.

The picture quality rating for the H7150 is a spectacular 90/100, according to LCD Buying Guide. Moreover, this high-quality television is a Smart TV (meaning it can stream from services, such as Netflix and Amazon), and it produces a quality 3D picture when you’re ready to enjoy a film.

If you’ve got the space to accommodate it, the Sony Bravia KD-65X9005B is one of the top selling 60-inch flat screen TVs currently on the market. It offers multiple high-end features, such as its masterclass 4K design and performance.

It offers both Ultra HD and Full HD sources (both color rich and dynamic). The television offers broad appeal, especially considering the included One-Flick discovery feature, and its ability to share your photos in a variety of places (including on social media). This is a statement television in every sense, and it will make an excellent addition to any home theater. The only thing missing is a pair of white gloves to prevent the oh-so glossy bodywork from being smothered in fingerprints when you’re wrestling it into position. 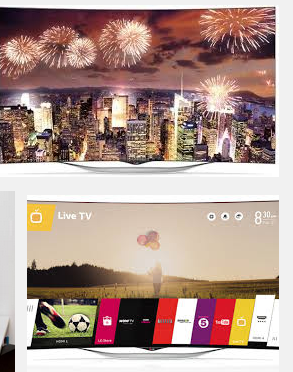 LG is the only brand currently offering a full-size OLED TV. OLED is next-generation LED, and offers lower energy consumption and a crisper picture. Andy Mackey, the UK Commercial Director at LG, has said that OLED offers the “Ultimate Display,” and that LG’s OLED offers “true colors, wide angle viewing, and the perfect viewing experience.”

Unfortunately, the LG 55-inch Curved OLED TV is very expensive. It costs more than $2,000, but it does come with a lot of unique features. It’s curved, 3D, and Smart. OLED TVs like this can be found online at Huppin’s.

Emerson may see like a great deal to those shoppers who are looking to save a buck, but their televisions have been known to fail buyers. As a brand, Emerson has a very low rating on ConsumerAffairs.com (one out of a possible five stars). With more than 590 complaints, it’s unlikely an Emerson television will meet your needs.

Complainants have reported that their televisions tend to turn off by themselves, and that the sound also turns off randomly. Emerson’s warranty program has received criticism as well, as customers found themselves charged for the television’s problems, or their warranties weren’t honored at all by the company.

So when shopping for a new TV for your new home, that will be perfect for the family on movie night always remember, the size of the TV and the price doesn’t always matter. When it comes to electronics, you get what you pay for.