These days the battle between cell phones and tablets are on its peak. Everybody loves to get the best cell Phone having best OS in it. The previous launch in mobile phones world was Apple iPhone 5 and it really took down all other mobile phones except Samsung Galaxy S3, because galaxy S3 is awarded as best cell phone of 2012. Now the rumors and news regarding galaxy s4 and HTC one are in market. It’s easy to compare iPhone and android cell phones, because they don’t have anything in common but now we are going to compare features of two android giants; Samsung Galaxy S4 and HTC one. 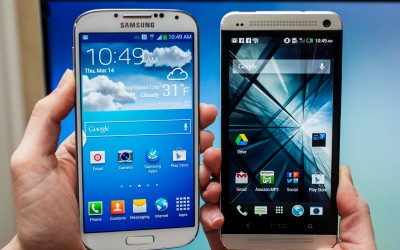 Features Comparison of Galaxy S4 and HTC One

In looks both cell phones have good impression on people but galaxy S4 is more slim than HTC one and height of both phones is 137mm. Truly speaking many of us like slim cell phones which are easy to carry and S4 is only 7.9mm in thickness, while HTC one is 9.3mm.

Now this thing is really important for long time users of cell phones, rich and affording people may avoid this feature. Samsung Galaxy S4 is made by plastic material and HTC one is having the expensive aluminum metal in it.  The strong metal in HTC one is making it durable and in case of any accident your cell phone might not get cracked, because of this aluminum.

Which one is Easy to carry?

Now the most asked question is here; which one is easy to carry? Both phones have so much big size with big screens and can be adjusted in your pockets easily but here weight of both phones matter. In the feature Samsung Galaxy is good because its weight is 130g and HTC One is 143g. Slim and light weight cell phones are normally attracting females because they want to carry it in their purses normally.

If you are talking about the display then always Samsung with android OS wins in this feature, because its galaxy series is popular for its clear and large display. HTC One also have good display screen of 4.7 inches but it’s not more than display of S4 with 5 inches huge display. But if you talk about graphics factor then Samsung is behind in this because it’s having 441 pixels per inch and the Smartphone is having 468 pixels per inch. In display I will rate both the same.

In this high tech world, people are demanding more and more storage space to keep software, videos and huge documents in their phones. Because of high storage spaces and speed cell phones and tablets may replace personal computers and laptops in future. HTC one has good storage space of 32GB and 64GB, but there is no option to expand it with any microSD card. But S4 comes with 16GB, 32GB and 64GB and also option of microSD is available in it.

Expected price of galaxy S4 is $579 and estimated price of HTC one is near about $299 on contract. HTC one has good features in this low price and I personally feels that galaxy has also moderate price because of it’s amazing features.

In general it’s clear that Samsung galaxy S4 is winning in this battle but nobody knows that what will happen in real when S4 will come into the market. May be rumors regarding galaxy S4 are wrong and HTC one is good. But the current comparison depends upon the latest updates about both cell phones.

Next Post How Colocation and Private Clouds Work Together