Project Neon, the upcoming major UI change to Windows 10 is set to arrive in September with Redstone 3. Microsoft is rolling out changes to the windows insiders already in patches with many major apps like Groove music, Photos, People and Paint getting the glimpses of Project Neon. This is a huge step forward for Windows 10 as it had the same user interface since almost two years.

Project neon will heavily focus on consistency across the apps, animations and simplicity. It somewhat resembles Windows 7 Aero glass effects that most people loved but Microsoft discontinued it due to unknown reasons. The blurred background will make the centre pop out more and give a nice aesthetic experience to the user.

As Windows 10 becomes more unified across PC, Mobile, Xbox, Holo Lens and other Internet of things, it unifies the experience. The Insiders have been reporting that the animations in Neon have been butter smooth and they are praising the Software maker’s decision. Microsoft has been on a spree lately with many apps in the fast ring getting the updates regularly. Hopefully it’s not all about the transparency and they will focus on the animations, font and other improvements. 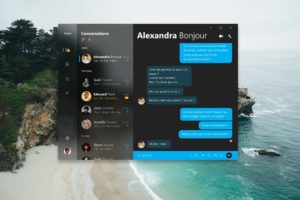 Other Microsoft made Windows 10 apps such as Movies & TV, Windows Maps have also imbibed some of the neon improvements. In apps such as groove music, the hamburger menu will have the blur transparent effect while the rest of the app has the nice black or white theme. This allows for a nice user experience as opposed to the same fell throughout the app. Star app developer for Windows, Rudy Huyn updated his Dropbox app with Project neon changes.

Previous Post Are VPNs Worth Your Time?
Next Post Android O is out for developer preview. Here’s what’s new PART I