What is Internet of Things (IoT)?

An environment which provides the unique identifiers for the objects, people or animal and gives the ability to transfer the data over a network without any human and computer interaction is called, “Internet of Things”. IoT is built on cloud computing and data gathering sensor networks with a vision to make everything in over life “Smart”. 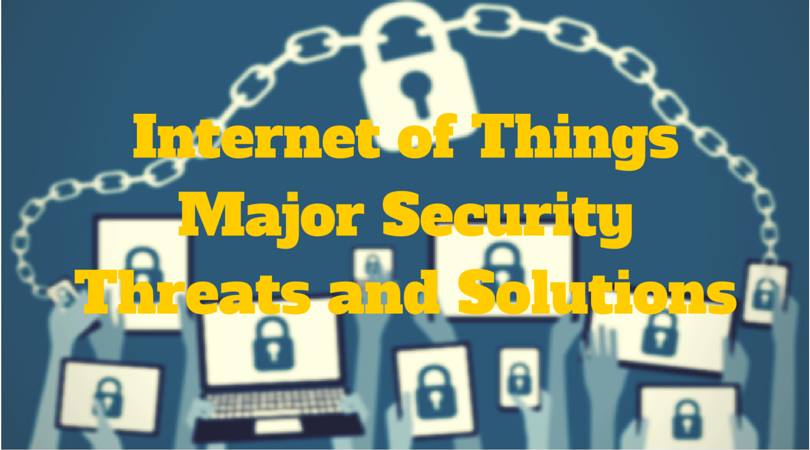 IoT has been a buzzword of the industry for years, its development is in trouble. The biggest concern for IoT security is the fake forecasts and big promises. Here, I came up with some “Major Security Threats and Solutions of Internet of Things”.

There are several reasons for which a device is attacked by a potential attacker. According to the functionality of the devices, they have a philosophic value. For example, when a security camera is in working mode, then it can provide very important and valuable information about the security analysis of a particular location whenever compromised.

Solution: At the time of manufacturing, each device is issued a device ID certificate to identify the device and to provide authentication to the services of the model and to make a connection to other devices.

The most common method of attacking IoT is interrupting and alerting the messages at the time of communication. This kind of attacks can be dangerous as the message transferring through IoT can contain a very high sensitivity and volume of data. These messages can be monitored, captured and manipulated in between the transit. So, attacks like these, questions about the confidentiality and privacy of the data being transferred through IoT.

Solution: At the time of the data is transferred through IoT, the encryption should be made on it to provide a security against the interruption. One good example of this is seamless and transparent encryption of a stored data to secure the digital privacy.

As the name defines, the master plays the role in managing the device functionalities, to provide facility of data analysis. There is a master available for every device on the Internet of Things. The list of masters of devices and services include service providers on cloud platforms, manufacturers of the devices, and solution providers on IoT. They are potential to inflict the most of the attacks happened on the devices. As they are masters, the devices include a large amount of sensitive and important data which are valuable for the strategic business asset and can be very vulnerable to the significance of competitiveness.

Solution: Digital certificates can be issued to this kind of devices by providing signed codes of the software updates. An SSL certificate can also be issued to such devices for an additional protection.

Be safe here and get maximum from IoT

The industry of the internet security is growing bigger and bigger with the market growth. An adoption in the progress of Internet of Things is also getting more interest day by day as the startups are providing more features and functionalities in their devices and services to achieve a strong position in quick time. With an informed engagement, collaboration in a range of stakeholders, and additional dialogs – this is the strategy is being used by the internet society to have the maximum benefits of Internet of Things.

Cutting short, IoT is a collection of powerful, tiny devices too, and these devices need a strong layer of security against vulnerable threats as our personal devices like tablets, smartphones, laptops and servers already have.

Hope you like the reading of this article. If you want to suggest anything regarding the challenges of Internet of Things, the greatest benefits of IoT, and about your embraced IoT devices, then you can share or mention it in the comments.