Almost everyone has heard about the famous instagrams and for those who yet do not have an idea may think of instagram as a social networking site as well as a mobile app which allows its users to take cool pictures and share them to his friends. Many new apps of instagram has been recently launched to enhance the user experience. But the thing that takes this thing to a next level is extragram. 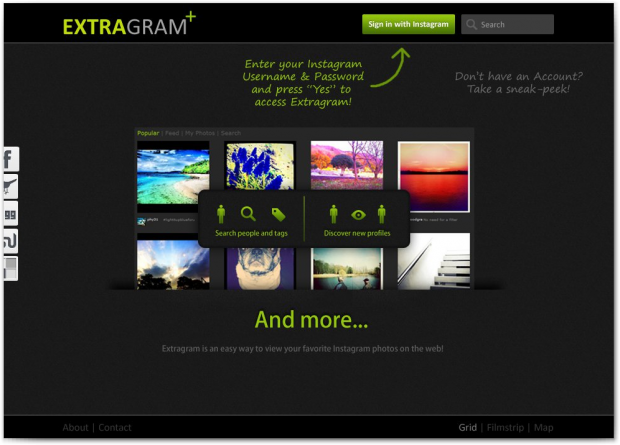 Extragram in a nut-shell can be described as the one which have all the features of instagrams in addition to which some more cool features have been added to it like location and tag based discovery modes and is considered to be more user friendly.

Hence if you are looking for a web experience that enables with all those properties that you find in instagram, extragram is the word that will stop your search. It steps ahead of other apps by providing a better interface, more functionality and some more features to keep you engaged with it.

The interface that extragram provides is very easy to use. It follows the perfect algorithm providing the photo content first and neglecting unnecessary information about your account and so on as are given in other apps like Gram feed.

The navigation here becomes much friendlier as it gives three ways to the user to sort the photos. These ways are on the basis of popularity, your feeds and the photos that have been uploaded by you. In addition to all of it, extragram adds one more feature to it which is the Discover mode which allows you to sort photos by recent tags, recent users, recent profiles. Further there exists a map view feature that in which you can browse the map according to your will, which may dragging or browsing manually or you let the extragram to show the resolute of the photos according to your current location.

Extragram provides you with the feature of Grid view and provides you with some extra details that you may like to check before leaving a comment on it. If you want to like a photo, all you have to do is to click the heart besides the Like count. If you want to leave a comment you just need to click on the comment bubble which opens a small window which tells you about the earlier comments on that photo and you may add your comment to it. Hence the grid view saves you a bit of time as well because you do not need to look all the photos. The photo that you like demands just a click on it and Extragram will take you to its details.

Many shortcuts have been included in the keyboard to perform specific tasks. For example, clicking Esc, you get out of the detailed view of the image to the grid view, you can use the arrow keys to navigate through the photos. However yet there are some limitations to it or the user may find some of the shortcut are not there like the working of the Enter button.

In short it may be concluded that extragram is one of the best application of its kind till the date, however still some changes may be added to it.