A couple of days back, the Government Of India imposed a ban on popular and widely used apps like TikTok. A total of 59 Chinese applications have been banned in India due to scrutiny and privacy concerns of users. After the official announcement of the ban in the public, a lot of Indian apps have come up to take place of those banned apps in India. The list of banned Chinese apps includes Tik Tok, which used to be a popular short video sharing platform where users can upload their videos and generate revenue.

After the ban, a lot of users have started searching for TikTok alternatives in India. As of now, the Chingari app is a leading alternative and probably the best option we’ve got so far. The app has been designed and developed by passionate Indian developers and has already been published in the Google Play Store.

Go ahead and continue reading the article to know more about the Chingari app and how you can create videos using it on your smartphone. In this article, we’re going to take a closer look at the Chingari app, which is the most trending app in India right now. So, without wasting any further time, let’s go ahead and dive into the topic.

What Is Chingari App?

Chingari is an android application aimed to replace the Chinese video-sharing platform, Tik Tok in India. The app enables users to create and upload short videos, which in return, will earn them points depending on the number of views it gets. Users will receive certain points for every view, which will be accumulated in their Chingari app, which can later be redeemed for real money. 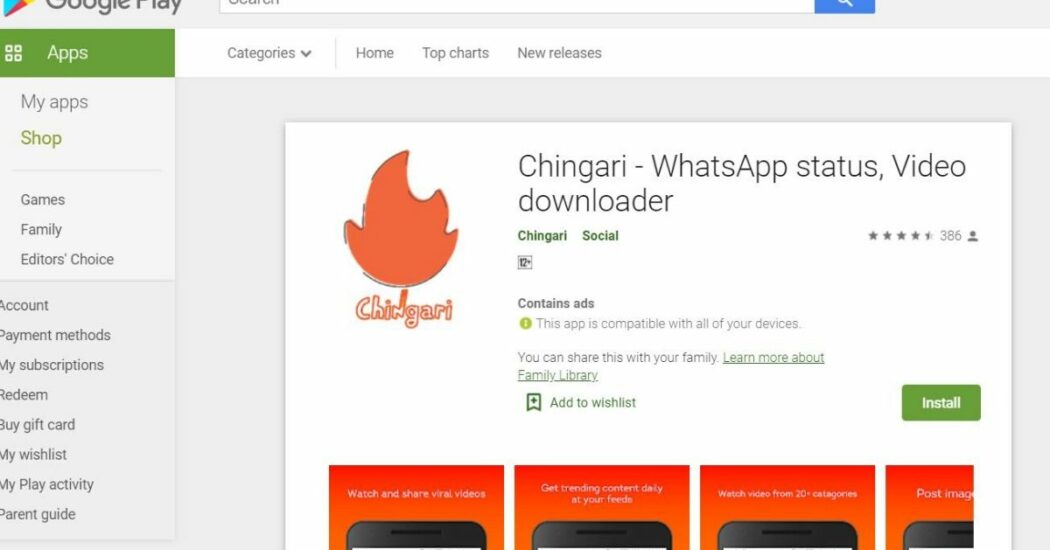 Coming to the video sharing aspect, the Chingari app allows users to select their desired filters, stickers, emojis, games, songs, etc, and combine it with their videos. In addition to this, users can also browse videos created by other users on the platform and watch them free of charge.

How To Install Chingari App On Android

The app will be installed automatically on your android device after the downloading is completed.

How To Make Videos On Chingari App

If you’re looking for a guide on how to make videos on Chingari, then you have come to the right place. Go ahead and follow these steps to get started by making videos on the Chingari platform.

Once the video is uploaded, it will be visible to everyone in the community and you will receive points in your Chingari account depending on the number of views your videos get. The accumulated points can be converted into money which will be transferred to your account.

Chingari Is The New Tik Tok Of India?

With over 1 crore downloads in the Google Play Store in less a month, the Chingari is considered as the new Tik Tok in India. In fact, it is probably the most popular and trending alternative to the banned app, Tik Tok in India as of now. Moreover, the Chingari is being called a modern India’s move in the country. The co-founder, Biswatma Nayak, of the Chingari app, has said that Chingari is a step towards fulfilling the call of Prime Minister, Narendra Modi, “Vocal For Local”

Q:- Is Chingari app same as Tik Tok in India?
A:- As of now, both the application have similar functionalities, however, the only difference is that Chingari is made in India, while Tik Tok is made in China.

Several software companies in India have seen the move of banning Chinese apps as a growth opportunity. In fact, plenty of Indian apps have emerged in the recent as alternatives to the banned Chinese apps. More apps like Mitron, Roposo, etc have gained a lot of attention in recent days. Make sure to bookmark this page on your web browser to receive future updates on the Chingari app. Let us know what you think of the Chingari app after trying it on your android device.