In 2020, the electronic and computer repair market in the US had an estimated value of $19.4 billion. That shows a decrease of 0.8% from the previous year. However, experts also say this will go up again by 2021, what with the increase in PC ownership this 2020.

Indeed, in March 2020, laptop and desktop sales in the US rose by 40% from the count back in March 2019. Keyboard sales jumped by over 60%, while headsets, monitors, and webcams sales went up by more than 130%. 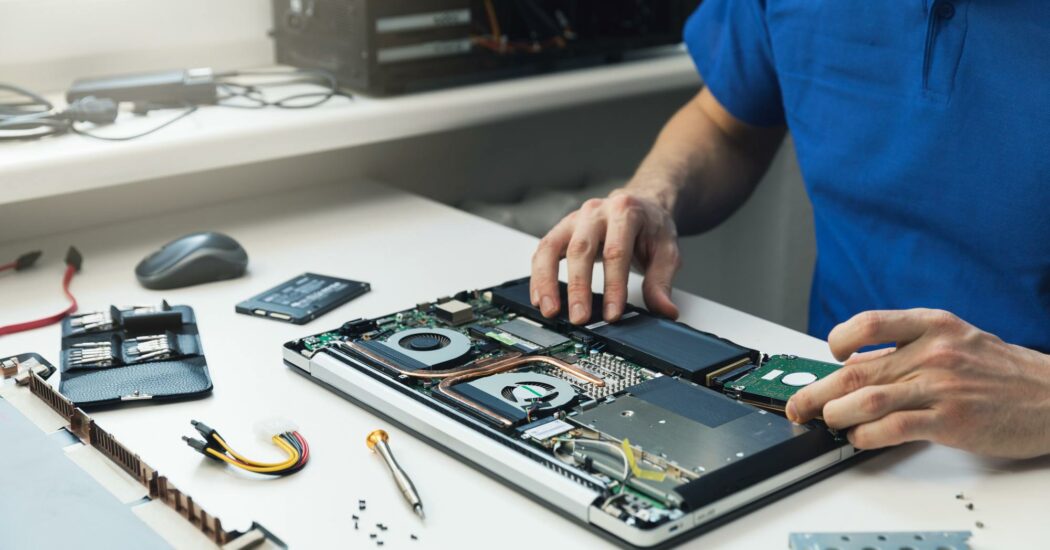 All that shows how computer repair costs could also surge due to the law of supply and demand.

With that said, you may be wondering if it makes sense to get your existing device fixed or if you should just get a new one. How do you even decide between getting a computer replaced vs. repaired?

We’ll answer all these questions in this post, so be sure to read on.

The average computer repair cost based on a per-hour technician fee is $65. Do note that this is only for the services rendered by the computer repair pro. It doesn’t cover the price of physical component replacements.

Suppose you have a failed hard drive, which is one of the most common computer issues. So much so that about 140,000 of these drives fail each year in the US alone. If you have an upgradeable laptop, you can get it fixed by replacing the dead drive.

If you get a new 256 GB mechanical hard drive, you can expect it to cost about $20 or so. If the tech can replace your failed drive within an hour, your total repair bill can sum up to less than $100.

That’s a pretty good price, so long as the only problem you have is a broken drive. If you have several other issues, like a dead laptop battery, you can expect to shell out another $15 up to $60. The bigger your laptop battery is, the pricier it gets.

Now that you know a bit more about the average computer repair cost, let’s take a look at replacement costs.

One way to gauge the average computer replacement cost is to know the mean spending on them. For instance, US consumers spent an average of $700 on laptop purchases in 2019. However, the actual prices range from a little under $200 to as high as $6,000.

Today’s cheapest brand new laptops, including mini-laptops and Chromebooks, cost less than $200. For that price, you get a device with a display that’s either under 12 inches or a big one that’s non-HD. Most of them come with a single-core processor and a storage space of between 16GB and 64GB.

You can think of these under-$200 devices as an “upsized” version of low-tier smartphones. You can’t play video games on them, but they’re okay for basic tasks like text editing and browsing. They do have a short battery life, though, with some lasting only up to an hour or two between charges.

When researching pricing, it’s not enough to look at authorized resellers’ websites. In many cases, buying a laptop straight from the manufacturer’s site can get you better deals. In doing so, you can unearth awesome mid-tier computers that cost less than $1,000.

For instance, today’s mid-level laptops often come with four- or even six-core processors. Most of these also have at least 8GB of RAM and 256 to 512 GB of storage. You can also expect these speedy devices to boast nothing less than 1080p or full HD display screens.

The Priciest of All

On the other end of the spectrum are high-performance laptops, which can cost over $4,000. These are elite performers, with the most RAM, storage, and processor cores. A good example is the Lenovo Mobile Workstation, with web prices ranging between $4,000 and $4,900.

These pricey models are best for video professionals, computing experts, and hardcore gamers. If you’re only an average user, you don’t need these specs, and you’ll only waste them and your dough.

When Does It Make Sense to Repair a Computer?

The average computer service life is between three and five years. Some PC makers, like Lenovo, specifically state their products to last for four years. This estimated life span is a good indicator of when it makes sense to fix or replace a device.

Let’s say that your current laptop is only about eighteen months old. At this point, it still runs, but it most likely does at a reduced speed and lower performance. In this case, it’s more practical and eco-conscious to get it assessed and tuned-up first.

In many cases, internal residue build-up is a culprit behind slow computers. Dirt and debris can make PCs heat up faster, hindering their performance. Getting yours cleaned and tuned-up may be the only thing you need to make it speedy again.

Aside from a “young” age, repairing your computer makes more sense if it only has an isolated issue. The example above about the solitary failed HD is one such instance of when repairs may be better. A few sticky or non-working keys on your keyboard may also just need some cleaning.

Repairing your device is also a good way to reduce your electronic waste. Do note that over 50 million metric tons of such waste get generated each year throughout the world. Unfortunately, 80% of these don’t undergo proper processing and recycling.

By choosing to fix your still repairable computer, you can avoid adding to the growing pile of e-waste.

Again, the age of your device plays a huge role here; if it’s about to reach the end of its service life, a fix may not be worth it.

For starters, repairing a computer that’s about to turn five years old may cost you more in the long run. That’s because its other parts have a high possibility of breaking down soon, too. So, even if you do get it repaired today, you’re likely looking at more repair costs in a few months.

However, the expenses associated with several repairs are only part of the problem. Here are the other reasons you should consider replacing an old computer.

Older Computers May Have Toxic Components

Many computers use heavy metals like lead, beryllium, cadmium, and chromium. Today, these components undergo heavy regulation, but they can still be in both new and old units. For instance, many electronics can contain up to but no more than 0.1% by weight of lead.

Fortunately, advancements in computer hardware manufacturing have found alternatives to these materials. For example, some PC makers, like Apple, no longer use batteries with any amount of lead, cadmium, or mercury.

So, if your current computer is several years old, it may be time to have it recycled. Make sure you bring your old device to an official electronic recycling facility. This way, the experts there can safely disassemble and recycle your electronics.

The Law of Demand and Supply

As mentioned above, there’s a high likelihood of PC repair costs rising due to higher demand. The fact that many countries are still on lockdown can further fuel cost spikes. After all, restrictions can reduce supply, and the lower the supply, the higher the prices can go.

If your laptop repair bill estimate sums to about $200 or more, it may be best to get a new unit. Such high costs are common in portable devices with damaged screens. The same goes for computers that have multiple failed physical parts.

If product support for your computer is nearing its end, that only means you have an ancient device. Most tech makers only “phase out” products after several years.

In such cases, you should forego repairing your computer. After all, once it breaks down again, support for it may no longer be available. In this case, you likely won’t be able to find compatible software or repair parts.

If the above happens, you’re at a high risk of losing all your precious digital data. That’s why you should back up or clone your entire system and transfer it to a new PC or laptop.

Be Tech-Savvy: Know When to Replace vs. Repair a Computer

There you have it, everything you need to know about computer repair costs. Again, it always makes sense to consider repairing a device first before trashing it.

If it’s repairable and the cost to fix it isn’t that high, consider getting it repaired. However, if the estimated cost exceeds a cheap laptop’s price, it makes more sense to buy a new unit.

Ready for more guides like this to boost your tech-savviness? Feel free to browse our site’s other categories and blog posts then!