With the price of smartphones rising with each new edition, it makes more sense to check out the previous model for a better deal. You’ll still get all the features you want, but you’ll come away with more change in your pocket. Let’s take a look at the iPhone 7 and see what it offers.

The iPhone 7 is the first phone to have some of the advanced features you typically find in the more expensive smartphones. An improved camera, faster processing, and longer battery life are just a few of the things that make this phone an excellent choice. Carriers like T-Mobile sell a brand-new iPhone 7 for hundreds of dollars less than the iPhone 8 or iPhone X or any comparable Android phone. 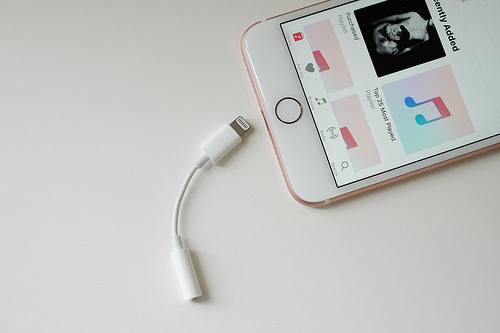 At first, people balked at the lack of a headphone jack. The iPhone 7 was Apple’s first phone without the traditional headphone jack. Instead, Apple introduced the Lightning adapter which uses the charging port and Bluetooth technology for a crisper, better sounding audio. The phone comes with ear pods, so you’re ready to listen from the moment you take it out of the box. And no more tangled wires to mess with. Beats also sell headphones and earbuds for the iPhone 7.

Additionally, Apple improved the technology that goes along with the new Lightening setup. A new W1 chip offers better wireless technology than older phones. Other Apple devices connect simply by placing them next to the phone, and the phone automatically recognizes the earbuds when you take them out and gives instructions for setting up your audio. In addition, the iPhone 7 has stereo speakers for a better sound without earbuds or headphones.

The iPhone 7 has a stately design with a brighter screen and HD color display. You’ll notice the home button gives you a slight vibration when you touch it. There’s also a low clicking sound when the spinning time wheel appears showing the phone is downloading. Case colors include silver, gold, and rose gold plus a matte black and jet-black color. The high gloss finish gives the jet-black phones a sleek, shiny look and is a very popular choice.

The iPhone 7 Plus includes dual-lens cameras with a better zoom feature, wide-angle lens, and telephoto lens. The 7 Plus also has a feature that gives you a bokeh effect where the background blurs slightly making your image stand out clearly. The camera has adjustable depth effects meaning you can add or take away depth from the image. Plus, the iPhone 7 gives you a live preview of the effect on your screen before you take a photo. All these features give you better control over the pictures you take.

The iPhone 7 is water and dust-resistant being able to withstand submersion in up to 3 feet of water without sustaining damage. Even so, it’s still a good idea to place your phone in a safe spot before you go swimming. The iPhone 7 and iPhone 7 Plus took Apple to new heights and still meets the needs of its users. So, save yourself some money and try the iPhone 7 instead of the more expensive phones.