With every passing year, the cybersecurity landscape is evolving continuously. Hackers are becoming more and more adept at tricking naive and expert users into becoming victims.

Hackmageddon estimates that the number of significant hacking events during 2016 to be in the range of 1061. The attacking techniques seen in 2016 has also undergone a sea change. Almost 33.1% of the attacks were done using unknown techniques. Accounting hijacking, targeted attack, DDOS, SQL injection, followed in descending order. The graph below shows how the attacking techniques have evolved since 2014. 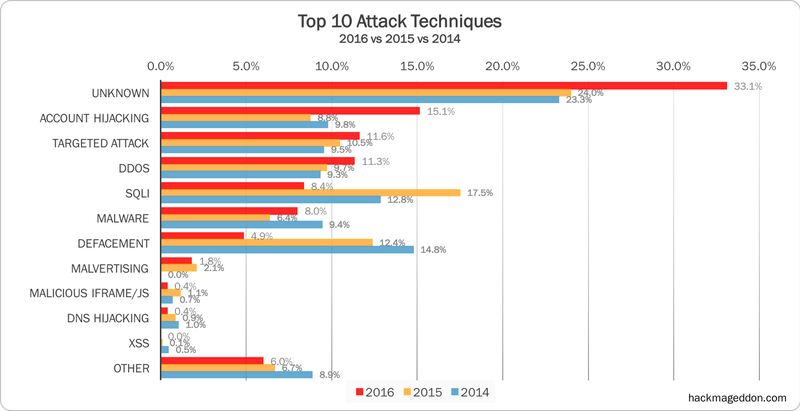 Considering the turn of events in 2015 and 2016, we can sum up the below-mentioned hints as for the possible top security trends for 2017.

And, we are just in September. There could still be inventive techniques that hackers might deploy to spread cyber crime.

In this article, we take a look at where the future security landscape is heading and what can be done to prevent catastrophic events.

IoT Devices Will Be Targeted as Much as Others

Gartner, the global Think Tank says that there will be 8.4 Billion connected “Things” in use in 2017. Internet of Things is becoming part and parcel of our daily life. They are interconnecting everyday devices, including home appliances to smartphones, computers and the Internet to make lives easier.

All this is also opening up a door of opportunities for hackers to steal their way into the private life of users. IoT has already been flanked by many IT experts as a technology with serious loopholes which need to be closed before it becomes commonplace. With a common security protocol and public awareness for IoT security yet to build up, we can expect more Iot devices to be targeted in 2017. Until a clarity is acquired, businesses will have to protect data exchange between their devices with a QuickSSL Premium certificate.

Consumer Mobile Devices will be Targeted

Smartphones have become an extension of our professional and private lives. Enterprises are also encouraging employees to practice work philosophies like BYOD (Bring Your Own Device) since it provides universal access to data and works emails. But, this point comes at a cost.

“Allowing that access can make data more vulnerable,” says Stan Black, CSO at Citrix. Employers are unable to control the kind of software and mobile apps that employees use to handle and transact confidential organizational data. Also, only a minority of smartphone users equip their devices with mobile security threat defense systems apart from the inbuilt password and access control measures. There is literally minimal data protection measures.

As a result, consumer mobile devices will be targeted with more increasing frequency than ever before.

Even Amateurs will Become Hackers with Off-Shelf Programs

Unlike in the past, when hackers had to be experts at coding and understanding network systems, today there is ready-made tools and software that can be bought off the shelf. These tools can be mastered by any amateur easily and even within a couple of days. This will lead to a mushrooming growth of hackers around the world.

Disgruntled employees, angry competitors, disappointed customers or literally anyone can target companies with these off-the-shelf hacking programs and cost companies millions in losses. Companies should acknowledge their online security at high priority and start buying cheap SSL certificates to protect themselves from this surge in hacker population.

US intelligence Chief James Clapper says, “I believe the next push on the envelope is going to be the manipulation or the deletion of data which would, of course, compromise its integrity,” Hurting the data integrity of organizations will give hackers a tremendous advantage in cyber crime activism. In case of international relationships, it will also lead to cyber warfare which will lead the relationships between countries to extreme hostility.

The recent wave of ransomware attacks has also been linked by the media to specific countries and their hostility towards the western countries. More than data theft, this form of data manipulation helps cripple the daily operations of large economies thus helping spread cyber crime.

Demand for Security Professionals will Increase

A McAfee report interview found that more than 82% of IT decision-makers experience a serious dearth of cyber security skills. Finding cyber security professionals is proving to be a challenge that most organizations are unable to overcome. CSO Online estimates the number of cyber security positions remaining vacant around the world to be in the tune of one million!

With hackers becoming more innovative at their procedures and more businesses joining the digital bandwagon, it is necessary to train and introduce more students to the IT security industry. The demand for such professionals will increase in the coming years, starting with 2017.

A new form of the business model is gaining momentum, thanks to the increase in cyber crimes. Cyber risk insurance is an insurance product that helps individuals and enterprises from Internet-based risks. CLIC (Cyber Liability Insurance Coverage) will help policyholders to receive compensation and manage their financial footing in the event of losses caused due to a security breach.

PwC, the global advisory firm estimates that value of CLIC premium to touch $7.5 Billion by 2020. These insurance policies will cover expenses incurred for investigation, business losses, lawsuits, extortion, etc. This probably should be in addition to the warranty claim by SSL Certificates of GeoTrust and other certificate provide as part of their offerings.

2016 has been an eventful year for cyber security. 2017 also ensued the trend with a series of security attacks that left the whole world, if not a substantial part of it digitally crippled.

With every passing day, the techniques used to hack into systems are becoming more inventive. The trends we discussed above suggests that hackers are shifting lanes to achieve their goals. Individual users and enterprises must gear up and raise their shields to safeguard their data and also their online reputation.

Previous Post Why Adobe Security Plugins Are Not Safe