For over 20 years, Microsoft PowerPoint was the de facto software in the presentations market. In 2006, Google launched its take on presentations–Slides.

By sheer persistence and Google’s might, Slide has grown into a worthy opponent. Question is, which one should you choose? 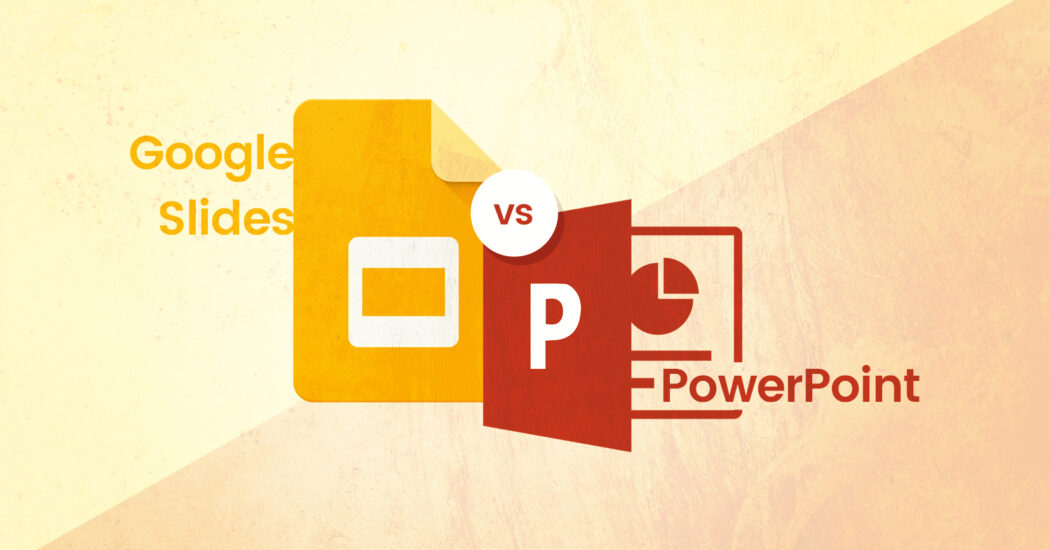 This guide examines the strengths and weaknesses of each, providing a definitive pointer for your next presentation software.

Since its first release in 1987, it has been the industry standard for producing presentations. It’s part of the Microsoft Office Suite, offering a host of creative and customizable templates and slides in its corner.

As one of the key challengers to PowerPoint, it presents a compelling product that keeps improving with time. Its main selling point is that it’s cloud-based–that means it has a few tricks PowerPoint can’t pull off.

How do they stack up against each other?

PowerPoint typically comes as a part of Microsoft 365 (formerly Office 365), which means you need a license to run it. That will set you back a minimum of $6.99 per month, or $69.99 for the yearly subscription. The cost will rise depending on the number of users.

Office home users and students can pay a one-time fee of $149.99. That said, you can access a free version of PowerPoint online.

Google Slides is a part of Google Docs Suite, which is entirely free.

They both offer support for images, videos, templates, and inbuilt transitions for professional-looking presentations. What’s more, there are formatting and editing options to tweak the presentations to your taste.

Both support YouTube video embedding, although you cannot embed audio on Slides, which is available on PowerPoint.

One exclusive and nifty PowerPoint feature is Broadcast Live that allows you to stream slideshows over the internet. Another is the Presenter View that allows projecting PowerPoint presentations to a second screen, such as a video wall.

You have to install the software on your desktop to run PowerPoint, with the hard disk providing local storage. If you want to access your PowerPoint file over the internet, you must move your files to OneDrive. It’s Microsoft’s cloud storage provider.

Google Slides is cloud-based, so you don’t need to download or install any software. All you need is a Google Account to start creating presentations, and storage is on Google Drive. You can access your templates from any device connected to the internet via a Chrome browser extension or Chrome OS.

Slides works on any platform, such as Android or iOS, so you can access presentations on iPhone, Macs, PC, or iPad.

PowerPoint is not strong on collaboration, but you can collaborate on a presentation by saving it on OneDrive. You will run into compatibility roadblocks if you don’t have the online version or have different PowerPoint versions.

Google Slides eliminates this hustle by operating exclusively online. There’s a version history feature that tracks every change and displays timestamps. That way, you know who made what changes and can revert to an older version when needed.

In addition, you don’t have to worry about compatibility as a Microsoft or Mac user can collaborate on a presentation. They can even work on it in real-time, and they do not need a Gmail account to do so.

PowerPoint is even more comprehensive, supporting the following file formats:

Google geared Slides towards internet-based workflows, ensuring they work flawlessly with a strong internet connection. Although there’s an online version of PowerPoint and a set of mobile apps, it’s not as feature-rich as Slides.

As for offline performance, roles are reversed. PowerPoint is the clear winner as it boasts a powerful array of features.

PowerPoint does not require an internet connection to run, and you save documents on your PC. Slides has offline support, but you have to turn it on, and the template won’t save on the cloud.

Which one should you choose?

Although they’re both presentation software, they have fundamental differences. For instance, Google Slides is a multifunctional software with a simple user interface and top-notch collaboration capabilities that have great slides themes.

On the other hand, Microsoft’s PowerPoint has a ton of functionality perfected from years of hits and misses. However, it faces limited co-working functionality.

Therefore, if you intend to do many collaborative tasks, Google Slides should be your software of choice. Head over to Microsoft PowerPoint if you need a robust, no-holds-barred presentation software that does not require collaboration.