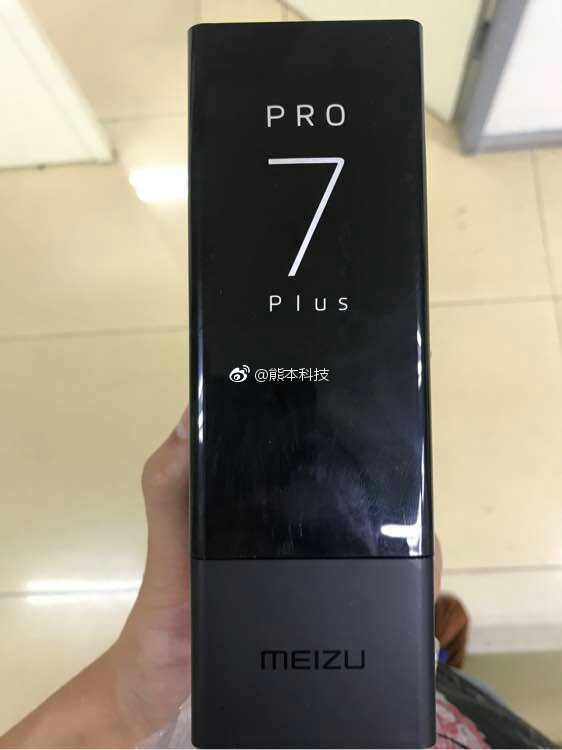 A new unverified render of the upcoming Meizu Pro 7 flagship surfaced today on the Chinese microblogging platform Weibo. The flagship is expected to launch in June and will be the reigning handset and face of the company for the rest of the year. We can expect its availability in the west delayed by a few weeks or a month, but definitely, we’ll have the opportunity to get it unlocked via retailers or non-contract carriers like Virgin Mobile.

Meizu Pro 7 will be set to rival some hi-end profile phones, it is rumored to be sporting a 5.7-inch display with a mind-boggling resolution of 4K. Meizu will be joining the Sony venture of 4K display phones. Nevertheless, Meizu will continue its loyalty toward MediaTek and land the Helio X30 SoC to its Pro 7 flagship.

Meizu Pro 7 appeared on leaks where the device was claimed to be featuring a screen resolution of 3840 x 2160 and sport a body built with titanium material. Expect it to be a durable device. The main camera of the phone is rumored to be the 12MP Sony IMX362 phase detection autofocus unit with 4K video recording while the name of selfie camera is not revealed yet.

Besides those innovative specs, Meizu Pro 7 is said to be having up to 8GB of RAM with 256GB of storage edition. However, not every edition of the phablet may be internationally available.

However, the latest leak reveals another version of the Meizu Pro 7. A larger edition that will be called Meizu Pro 7 Plus. As the Samsung Galaxy S8 released in two large versions, a 5.8-inch standard edition and 6.2-inch Plus edition, Meizu might have kept a note on that and decided to give its own flagship such large body addition.

Meizu may become the hottest Chinese phone of 2017 and may outrun the upcoming Xiaomi Mi 6 and Mi 6 Plus mainland competitor. A brighter screen may just be something users need more than a faster performance.