In the recent times, a lot has been spoken and heard about the LG World Record Forum. The latest with regards to the same is nothing, but the Flash Mob Proposal. For all you people who are unaware, let me tell you that this particular article, we will be bringing to your notice the much talked about Flash Mob Proposal along with a good deal of add-ons that are associated with the same.

How it all began?

One such loverboy by the name of Karan Arora was looking forward to propose marriage to his long time girlfriend Pooja Basara. Karan wanted this cute little Delhi based love story of theirs to turn into one such precious, memorable moment that they could cherish for a lifetime and that also before they officially tie the knot. His only aim here was to come up with something that is extremely out of the box and creative. Karan had been scratching his brain for quite some time in order to set up something that not just ends up pleasing Pooja, but at the same time leaves her stunned. 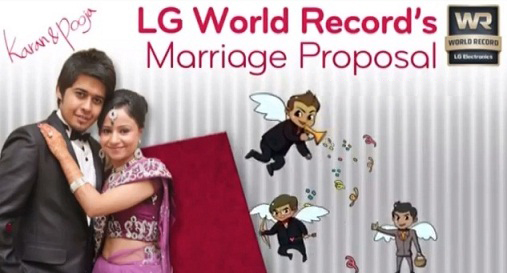 This is exactly when he happened to have an encounter with Sherlock, the LG Electronics World Record Man. One particular day, Karan just went ahead to inquire about the Dual Play glasses that come out of the kitty of LG, when just by fluke he happened to mention that he is shortly going to get engaged. This is when Sherlock, who also happens to be the brand ambassador of LG for social networking websites such as Twitter and Facebook thought of utilizing Karan’s desire in order to improve LG’s brand recognition. Moreover, apart from working in the stride of LG, this particular concept was also expected to do good to Karan as well as his relationship. This was exactly where the whole Flash Mob Proposal concept happened to take birth for the very first time.

Once it was concluded that this particular concept was going to be a win-win situation for both the parties that is for Karan Arora as well as LG, it was decided that they should go ahead and discuss the same in further detail. At a very primary level, the idea of coming up with a flash mob was introduced. The sole aim of the flash mob concept was to leave the to be bride by surprise. A good deal of effort was put in, in order to appropriately execute the complete plan.

First and foremost, concern was to settle down for a bang on location. After a sufficient amount of debate and discussion, the Ambience Mall in Gurgaon came to be shortlisted. Once this was done, the basic outline for the flash mob came to be laid down. The preliminary blueprint highlighted the complete event implementation, which revolved around Pooja’s entry after, which a group of dancers were expected to start dancing all of a sudden. Within passage of few moments, round about hundred individuals including professional dancers, friends as well as random volunteers were expected to join the mob.

The Flash Mob Proposal ended up becoming a huge success not only for LG, but also for the Delhi Romeo Karan. As far as Pooja was concerned, initially she ended up giving mixed reactions, but seemed to be at ease once Karan came in front of her eyes. The good news with regards to the Flash Mob Proposal was that Karan’s proposal was happily accepted by Pooja. Moreover, this particular Flash Mob Proposal concept is definite to be carved in the long lasting memories of both Karan as well as Pooja.

Not an easy task:

Though the lovey dovey scenario worked out to be exactly as per the plan, it definitely involved hard core hard work on the part of Karan. Karan, who happens to be a non-dancer took up vigorous training from professional dancers as well as Bollywood choreographers in order to make the flash mob proposal a hit. You will be taken by surprise to know that the complete preparation took about one month in order to perfectly materialize. If you want to catch up on the preps, then in that case you can simply glance through the videos that are likely to be released by LG over a period of time. However, you can catch a glimpse of the main video, which happens to revolve around the Flash Mob Proposal right away on YouTube.

It is but obvious that the Flash Mob Proposal has contributed considerably to the brand image of LG. In the times when we can observe cut-throat competition in the home entertainment industry, this particular event is definite to bring LG in the limelight. All said and done, we can simply conclude that the Flash Mob Proposal was absolutely a wise decision, which is likely to be remembered by not only Karan and Pooja, but also loads and loads individuals out there.