Xiaomi Redmi is one of the smartphones that largely garnered its attention by the users because of its features and price. It is the main reason that most of them are always excited to follow the path of Xiaomi series mobiles often. In this case, recently the rumours are spreading on features about Redmi Note 5. It is said to be one of the best upcoming phones of the Redmi instalment. Let’s check out that what all the stuff hidden and get ready to surprise us after its launch. Hope the given below stuff will be interesting and excited to the users of Redmi and the people who all are waiting for this upcoming phone to purchase. 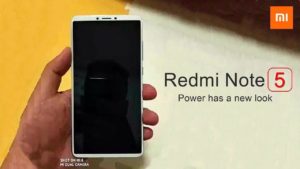 As per the sources to be believed, Redmi Note 5 will be expected to launch in March 2018. The amazing features of this phone are mainly considered to be its speciality. When it comes to displaying, we could expect 5.99-inch FHD display which is a touchscreen that has the resolution of 1080 x 2160 pixels. For your information, the screen is also mainly protected with corning gorilla scratch resistant display. However, it is going to be one of the best phones of Redmi series.

The major highlight of this phone is it will be powered up with 2GHz Octa core Qualcomm Snapdragon 630 processor. Also, when it comes to RAM, it has 3GB RAM which is quite exciting and satisfying according to its price. On the other side, we could expect 32GB internal memory and offers you the best outcome to store your data. However, you can also expand your storage memory up to 256GB with the help of SD card. Thus the phone is mainly running on the android platform of Nougat which is considered being out of the box to perform.

This smartphone is mainly powered by a battery of 4000mAh. It is the phone that mainly said to be Dual SIM smartphone which also has the connectivity option of HotSpot, WiFi, Bluetooth and GPS. It is the main thing that makes this phone as a good one at the end of the day.

If you are looking for the camera quality, then this phone has 12 + 12 MP shooter with HDR, Touch focus, video recording, Autofocus and face detection. For the better selfies, this smartphone has the front camera of 5MP which is quite good according to its budget. When it comes to capturing the video, the quality and tone of the video will enhance in a rich manner. Also, you can get a perfect picture of the party as well.

As per the sources, the price would be Rs.9999/- which is pretty cheap when it comes to purchasing. It is also available in three colours like silver, black and gold which are very attractive. So, people who all are keenly waiting for its launch on March let’s wait to welcome the brand new mobile in the market soon.

Previous Post What software do you need for music production?

Next Post When Conciseness Matters: Spontaneous Purchases in response to …