The vast majority of our planet is covered ocean. This means that relatively speaking, we’ve yet to explore most of the world we live in. Sonar technology, to some degree, has allowed us to reveal some of the earth’s dark, foreboding depths, but the truth is its value to society goes far beyond merely painting a more complete picture of the blue marble we call home. 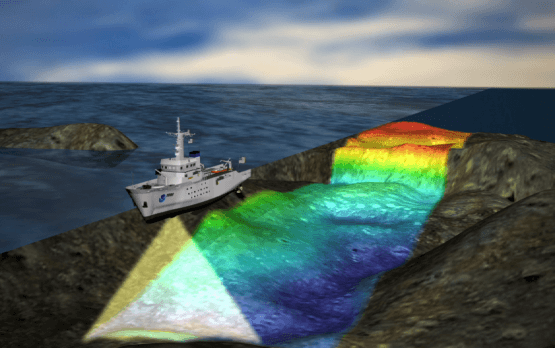 Though it’s fair to say that most people associate sonar (an acronym meaning Sound Navigation & Ranging) with applications like sport fishing or submarine detection, it is arguable that the technology’s lesser known applications are having a much larger impact on a grander scale.

When speaking about the potential applications and benefits of using sonar technology, it’s important to understand the difference between what’s referred to as active sonar and passive sonar.

Active sonar is the type of sonar technology that is considered to have the most diverse uses. Essentially, an active sonar system emits a pulse or “ping” beneath the surface of the water. The pulse then bounces off of various objects, and a device called a sonar transducer picks up the returning signal. Depending on the strength of the signal, characteristics like an object’s distance from the source of the pulse can be identified.

Conversely, passive sonar systems do not emit a pulse. They are however sophisticated auditory signal detection systems that are often used by the military to detect underwater vessels, or by the scientific community to monitor the noises made by marine animals like whales.

Underwater oil and gas pipelines are vital to the retrieval and distribution of resources. As worldwide reserves continue to dwindle, the oil and gas industries are constantly pushed to more remote and inhospitable locations, so it stands to reason that they need to be extremely vigilant in monitoring the conditions of their underwater infrastructure.

Since most of this infrastructure lies beyond the reach of technicians, sonar technology must be used to determine whether or not the pipes are in any way damaged or potentially likely to fail.

On land – or perhaps more appropriately, below ground – acoustic signals are used by municipalities and water utility companies to perform pipeline condition assessments and water main monitoring activities. Sensors placed on the water system’s above ground components emit an acoustic pulse along the pipe. By measuring the amount of time it takes for the signal to be recorded, the sensors help to identify if a portion of the pipeline has suffered any degradation, which in turn allows technicians to proactively make repairs.

As more and more offshore wind turbine farms are being installed, high-resolution sonars are used to determine whether or not a proposed site is geologically sound for the installation of these massive structures. Without using sonar technology, there would be no way for engineers to assess the composition, density, and integrity of the underlying strata of earth.

The economies of the world rely on massive transport ships for the distribution of goods from one continent to another. Over the years, sonar technology has been used to measure the depths of the ocean – not only to give us a sense of what’s down there, but also to establish safe shipping lanes. By identifying routes that are obstruction free, it’s far less likely that one of these ships, carrying millions of dollars of inventory, will run aground.

The ocean floor is quickly becoming a major component in the global communications sector, as fibre optic lines link one continent to another. Before these cables can be laid, sonar technology is extensively used to search for any unexploded munitions that might jeopardize the project or pose a risk to installation crews. Since the end of the Second World War, it’s estimated that there are still millions of unaccounted for and unexploded ordinances in the Atlantic Ocean alone.

With all these benefits to using sonar technology, we must also be mindful of how it is used in the oceans. Depending on the frequency of use and the intensity of the signal, sonar technology can be disruptive to marine life – particularly to whales. By continuing to develop the technology and ensuring its responsible use, there’s no reason why sonar can’t continue to be of benefit to humankind while doing very little to impede the well-being of the many creatures beneath the waves.