Xiaomi Redmi Pro 2 is the next smartphone from the popular Chinese mobile manufacturer. An image of Redmi Pro 2 has appeared one a Chinese blogging site. Many big tech blogs and channels are claiming, Redmi Pro 2 could be the next bang from Xiaomi. Here are the leaked specifications of Xiaomi Redmi Pro 2. The details provided in this article are collected from different sources; there is no official word from the company yet. The smartphone is claimed to be coming in two different variants, i.e., 4 GB Ram version and 6Gb Ram version. 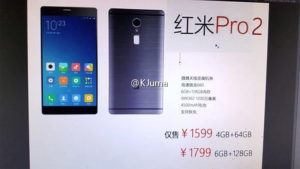 Let’s talk about the camera specs, Xiaomi Redmi Pro 2  sports a 12 Megapixel camera which is placed on the back and comes with a Sony IMX362 sensor. The smartphone is reported to come with a dual rear camera setup for perfect photography.

Previous Post ZTE Blade A2 PLus Launched In India

Next Post Why you Should Create Unique Name for Wireless Network