In the upcoming 13th match, Kings XI Punjab and Delhi Capitals will compete with each other at the PCA IS Bindra Stadium in Mohali on Monday 1st April 2019. The cricket buzz has been spreading across different parts of the country through the Vivo IPL 2019 Tournament. In the previous matches, KXIP won 2 matches and lost 1 match. On the other hand, Delhi Capitals similarly won 2 matches and lost 1 match. As KKIP won matches against Mumbai Indians and KKR, they have immense confidence in themselves. K L Rahul has once again returned to his form and scored 71 runs in just 57 balls. On the other hand, Chris Gayle is another skilled player.

After their second match, they tasted loss in their match against MS Dhoni’s Chennai Super Kings. However, they regained their energy and confidence after winning in the match against Kolkata Knight Riders on the weekend. As the match on Monday is in the home ground of Punjab, there are higher chances for KXIP to win the match over Delhi Capitals. Here is everything you need to know about Kings XI Punjab Vs Delhi Capitals which is 13th match in the 12th season of IPL 2019. Get to know the live streaming, cricket scores and more on this website.

Punjab team won a couple of matches out of three matches they have played in IPL 2019. Their victory against KKR in their home ground could become a strengthening element for the team. He made slight changes to his team and made the equation precise. David Miller is seeking to make changes to the bowling area so that they have higher chances of winning the match. In the bowling side, Shami, Andrew Tye, and Hardus Viljoen are the key bowlers in Kings XI Punjab Cricket team in IPL 2019. In the year 2014, Kings XI Punjab has turned out to become the successful season for all the players. 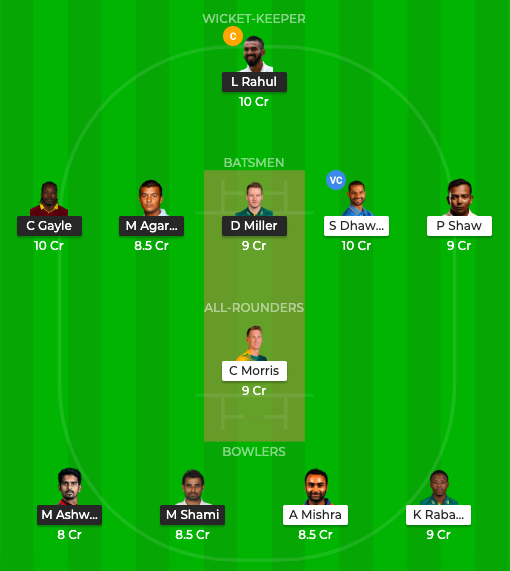 Delhi Capitals has altered the bowling department contemplating the pitch in Feroz Shah Kotla. There are as many chances as they might shuffle the pitch in Mohali. The Live streaming of KXIP and DC is also available to watch on Star Sports 1 HD, Star Sports 1 in English Commentary and Star Gold in Hindi Commentary. It is also possible to stream live cricket on Hotstar app and the official website as well. Kagiso Rabada and Sandeep Lamichhane are the prominent bowlers from Delhi Capitals cricket team in the current season of IPL 2019.

Match Prediction: As per our prediction, we expect that the Kings XI Punjab will triumph over Delhi Capitals in the upcoming match which is at 8 PM in the evening session.

We wish all the players from both the teams to put their maximum efforts so as to win the match. For more latest updates, visit this website that offers live streaming and cricket scores of different matches of IPL 2019.