Nitendo is a leading Japan based company that is renowned for offering some of the finest gaming consoles and games such as SNES, Gameboy and Super Mario among other popular games. One of Nintendo’s most sought after gaming console is the Nintendo 3DS. The console offers unlimited opportunity to interact with friends and play some of the most interesting games like, Super Street Fighter IV, Samurai Warriors, Face Raiders and Lego Star Wars III among others. 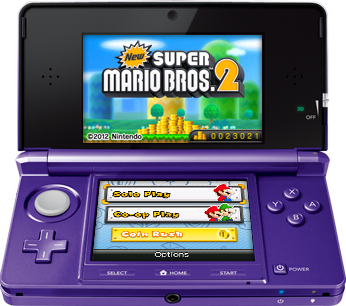 The console boasts of an exquisitely designed 3D screen, which implies that you will be able to enjoy high-quality 3D viewing without wearing 3Dglasses. Nintendo 3DS also offers the flexibility of either turning off or adjusting the 3D effect using the depth slider, which essentially implies that you can escape the 3D effect and 3D world, every time you wish to switch to normal viewing mode.

The console also boasts of an amazing stereo camera that allows you to click 3D pictures for instant viewing. Nintendo 3DS also comes with innovative input interfaces like, motion sensor, Circle Pad and gyro sensor, which enables, quick, easy and accurate game play. The new Nintendo 3DS by Tesco offers features, which can be accessed without pausing game play. Some of these features include internet browser, innovative system transfer, home menu and notifications. The console can process graphics faster when compared to its predecessors.

With Nintendo 3DS, gaming is much more fun and exciting. Some of the games that you can consider playing on it include:

Face Raiders: Built into the Nintendo 3DS, in this particular game, you will have to shoot the heads that are smiling and winking at you. In order to aim accurately, you will have to move your 3DS smoothly all over.

Pro Evolution Soccer 2011 3D: This game provides you the much desired opportunity to enjoy the game of soccer, especially when the 3D effect is so real and enticing.

Lego Star Wars III: The graphics of this game is simply adorable. It is essentially a game where the player is engaged in the star wars. The 3D effect is fun to watch.

Pilotwings Resort: Akin to the previous games, Pilotwings Resort offers a host of challenges that are easy in the beginning but quite challenging in the end. The 3D effect of this game will draw you towards it and since the graphics used in it are clean and enhanced, you will definitely admire the game.

Ridge Racer 3D: The tracks, in this game, have been recycled and the visual effects and graphics enhance the beauty of this unique racing game further.

Super Street Fighter IV 3D Edition: In this game, you will be battling a long list of fighters and fighting with all of them would be sheer fun as you will be viewing them in enhanced 3D mode.

Samurai Warriors Chronicles: This is a game meant for the warriors. Even as the Koei keeps expanding its armies by including goons every now and then, you need to fight and kill them to win the game eventually.